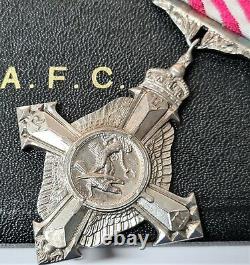 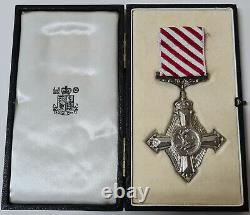 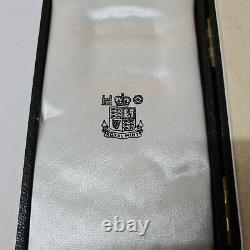 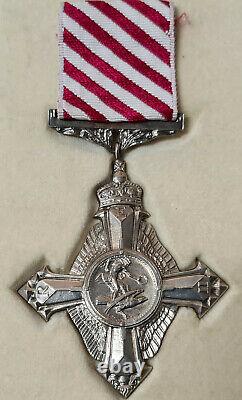 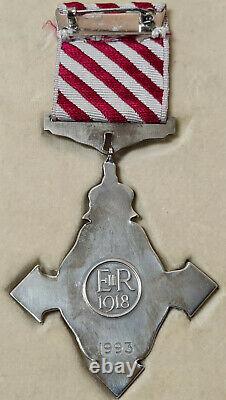 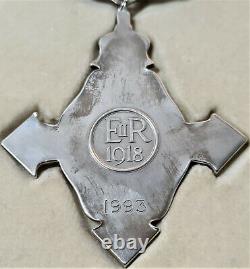 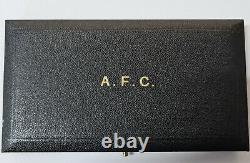 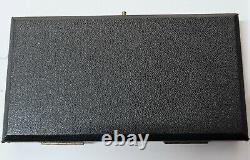 Offered is an original Australian/British Air Force Cross with ribbon, mounted as presented/worn. This is a EIIR awarded example, in the original Royal Mint case of issue. A scarce award, especially as it is a current monarch era award. The obverse depicts Hermes, riding on the wings of a hawk holding a laurel wreath.

At the top of the upper arm is the royal crown, while the other three arms bear the royal cypher of the reigning monarch of Queen Elizabeth II. The solid silver medal is 55mm wide. Plain reverse, with the Royal Cypher & institution date of 1918 in a circle. 1993 date of issue is engraved to lower arm.

The ribbon width is 32 mm and consists of equal diagonal moire stripes of red and white. The award was established on 3 June 1918, shortly after the formation of the Royal Air Force (RAF).

It was originally awarded to RAF commissioned officers and Warrant Officers, but was later expanded to include Royal Navy and army aviation officers. While consistently awarded for service while "flying though not in active operations against the enemy", the AFC was originally awarded for "valour, courage or devotion to duty whilst flying" with many awards made for meritorious service over a period of time, rather than a specific act of bravery. These awards were discontinued in 1993, when the criteria was narrowed to "exemplary gallantry while flying". A bar is added to the ribbon of holders of the AFC for each further award, with a silver rosette worn on the ribbon when worn alone to denote the award of each bar. Recipients of the Air Force Cross are entitled to use the post-nominal letters "AFC".

Between 1919 and 1932 the AFC was also awarded to civilians, on the same basis as for RAF personnel. In March 1941 eligibility was extended to Naval Officers of the Fleet Air Arm, and in November 1942 to Army officers, with posthumous awards permitted from 1979. Since the 1993 review of the honours system as part of the drive to remove distinctions of rank in bravery awards, all ranks of all arms of the Armed Forces have been eligible, and the Air Force Medal, which had until then been awarded to other ranks, was discontinued.

The AFC had also been awarded by Commonwealth countries but by the 1990s most, including Canada, Australia and New Zealand, had established their own honours systems and no longer recommended British honours. We list militaria and coins weekly. We provide quality mounted medals, badges and historical research. We can mount your miniature or full size medals, ribbon bars or supply replacement ribbons or badges.

We can also conduct military research on your behalf and value cherished objects with a current market or insured value. We run two specialist military auctions per year. Items are accurately described & photographed. Additional costs for this standard service will be added for this service based on publicly available Australia Post rates.

Please note, these items are located and will be posted from Australia. We appreciate fair feedback from you once you receive the item. We aim to give you, the customer our best customer service. The item "1993 DATED AUSTRALIAN BRITISH NEW ZEALAND CANADA CROSS MEDAL ANZAC AFC" is in sale since Wednesday, January 20, 2021.