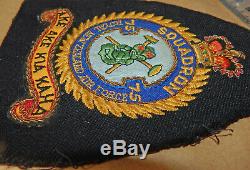 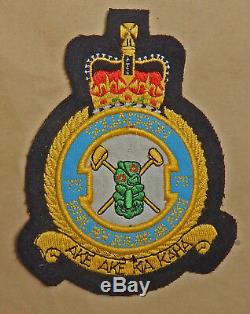 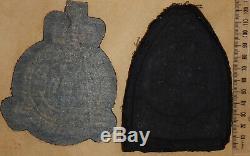 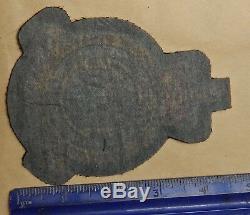 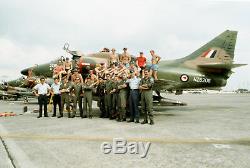 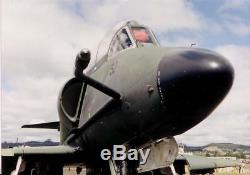 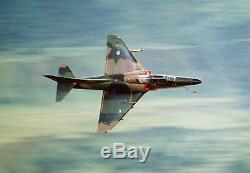 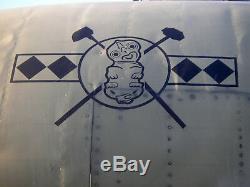 This listing is for TWO (2) post 1953 R. 75 Fighter Squadron Sqn Patches. One is considerably OLDER than the other the "newer" one dates to the 1990's and the REALLY NICE Bullion Wire officer's?? patch likely from a few decades before when QUALITY rather than "economy" were the watchword of our tiny New Zealand Air Force. 75 Squadron RNZAF was an air combat squadron of the Royal New Zealand Air Force.

It was formed from the RAF's World War II bomber squadron, No. 75 Squadron, which had been initially equipped by the New Zealand government and was largely manned by New Zealanders. The squadron was created when, in a unique gesture, the squadron number, colours and battle honours were transferred to the RNZAF in 1946. It had flown more sorties and suffered more casualties than any other in the European theatre.

The squadron ceased to exist on 13 December 2001, when the RNZAF Air Combat Force, comprising Nos 2, 14, and 75 Squadrons, was officially disbanded. 75 RFC / RAF History No. 75 Squadron Royal Flying Corps (later RAF) was formed as a home defence fighter unit on 1 October 1916 but disbanded in June 1919 following the end of World War I.

The squadron reformed at RAF Feltwell in Norfolk on 15 March 1937 as part of the RAF expansion in the mid-1930s, with transfer of pilots from No. 215 Squadron RAF, being equipped with four Vickers Virginias and seven Avro Ansons for bomber training. The squadron later operated Handley Page Harrows which were replaced by Ansons in 1939, operating again in a training role alongside No 15 Operational Training Unit. Meanwhile, the New Zealand government had ordered 30 modern Vickers Wellington bombers to replace its Vickers Vildebeests in New Zealand.

Aircrew were sent to England to train on these new aircraft before flying them back to New Zealand. In August 1939, with war seeming increasingly likely, the New Zealand government offered to place both men and machines at the disposal of Britain. They were allocated the "75" squadron number and the squadron officially became No.

75 (New Zealand) Squadron, RAF on 4 April 1940. It was one of the first of the "bracket" squadrons. Ultimately, six other New Zealand units, as well as many from other countries, were formed within the RAF, until the practice ceased in 1942. These squadrons were usually formed around aircrews from the named nation, replacement aircrew where possible coming from that nation as well, although most ground crew were British. 75 Squadron RAF The squadron was progressively equipped with Wellingtons, Short Stirlings, Avro Lancasters and finally Avro Lincolns, which it was preparing to take to the Far East as part of Tiger Force when Japan surrendered. Some have claimed that No 75 Squadron it to be the only squadron engaged constantly against Germany from 1939 to VE day. However, as the 75 (NZ) Sqn only stood up in April 1940, this is not correct. It flew more sorties than any other RAF heavy bomber unit, suffered more casualties than any other squadron, and dropped the second-largest weight of bombs. A pilot of the Squadron was awarded a VC in 1941, Sergeant James Allen Ward climbed along the wing of a Wellington in flight, in an attempt to extinguish a fire from an engine after a night fighter attack. No 75(NZ) Squadron RAF saw action early over France, Norway and most other European nations, but principally against Germany. The squadron was part of the first major bombing raid on Germany, a night raid on oil infrastructure in the Ruhr on 15 May 1940. In September that year the squadron took part in the first large-scale bombing of Berlin. A Lancaster, (ND917), a Mark III captained by Squadron Leader N A Williamson, RNZAF, on 30 June 1944 became the first British heavy bomber to land in Normandy after the invasion began.

The Lancaster was returning from an attack on Villers Bocage in support of the Army when Williamson landed on one of the newly laid landing strips on the beach-head to seek medical aid for his flight engineer who had been wounded by flak. An unusual sortie for 75(NZ) Squadron was the high altitude run over The Hague in March 1945 by a lone Lancaster piloted by Flight Lieutenant H W Hooper. He dropped thousands of leaflets containing an apology from the British government for the earlier Allied bombing of the city which had been an error. In recognition of their wartime record, in October 1946 the RAF officially handed over the 75 Squadron title and badge to the RNZAF. This is the only occasion that the RAF has gifted a Squadron title and badge to another Commonwealth Air Force and is a tribute to the sacrifices and contribution made by all New Zealanders in the RAF during World War II.

The post-World War II squadron reformed at RNZAF Base Ohakea from No. It was initially equipped with twin-engine de Havilland Mosquito fighter/bombers. In 1950 and 1952 the squadron's Mosquito's sank two ships (for target practice), the barque Lutterworth with bombs in 1950 and the Arahura with rockets in 1952.

The unit operated de Havilland Vampires from 1951 to 1970 out of Ohakea. In February 1958 Her Majesty Queen Elizabeth the Queen Mother presented No 75 Squadron with its Squadron Standard, the squadron having earned the Sovereign's appreciation for outstanding service. Fourteen Battle Honours were awarded, eight of which are depicted on the Standard. From 1958 to 1962 the squadron operated nine English Electric Canberras, on loan from the RAF, out of RAF Tengah, Singapore. They were used on anti-terrorist operations during the Malayan Emergency.

Ten were single-seat A-4Ks, and four twin-seat TA-4Ks. Early in their life all of the aircraft were modified with cranked refuelling probes.

In 1984, the NZ Government bought another 10 A-4s from the Australian Navy, and in 198889, the Skyhawk fleet underwent Project KAHU which upgraded the avionics systems. The squadron's former Royal Australian Navy A-4G aircraft were then re-designated A-4K/TA-4K. In 1994 a major escape system change was initiated to fit the UPCO SIII3S-ER ejection seat to replace the MDD EScapac1G3. However, the National Party under Jenny Shipley then decided to replace the A-4 Skyhawks with 28 F-16 Fighting Falcon Block 15 surplus aircraft from the USA in 1998. But the Fifth Labour Government of New Zealand under Helen Clark in 1999 with totally different military views decided to remove all attack aircraft from the RNZAF, and the Skyhawks were removed from service and the squadron disbanded in December 2001.

A RNZAF A-4K in 1982 Disbandment The RNZAF Air Combat Force, comprising Nos 2, 14, and 75 Squadrons, was officially disbanded on 13 December 2001. The disbandment day parade marched the three squadron standards to the Base Ohakea chapel of St Mark and were laid up there to hang from the rafters, until such time as the squadron/s are reinstated. A political group of concerned civilians and ex-serviceman, called "Save Our Squadrons (SOS)" was formed to protest the move, and took high court action in an attempt to prevent its loss.

The court action was not successful. The New Zealand National Party at the time had promised to re-establish an air combat force if it was re-elected, however in later years statements from their defence spokesperson suggested the cost to do so might be prohibitive. In November 2008, the Labour Government was defeated by the National Party led by John Key. Reinstatement of the air combat capability is very unlikely, although it has been discussed in the media from time to time. The Skyhawks are preserved in their RNZAF colour schemes and are used as an adversary squadron against USAF and US Navy fighter aircraft. Draken International also brought 8 former RNZAF Aermacchi MB-339 training jets. We will happily COMBINE these....... Any questions please message me.

Add a map to your own listings. The item "2 DEFUNCT Royal NEW ZEALAND Air Force RNZAF 75 FIGHTER Squadron PATCHES QE2 era" is in sale since Friday, May 3, 2019. This item is in the category "Collectibles\Militaria\Current Militaria (2001-Now)\Original Items\Patches\Air Force".

The seller is "phillip_in_new_zealand" and is located in Auckland (aprox. 12,000 "clicks" from USA).