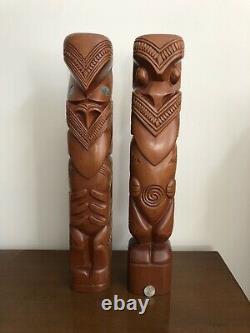 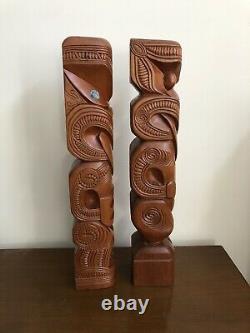 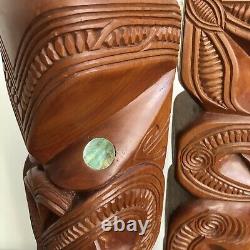 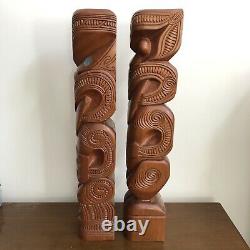 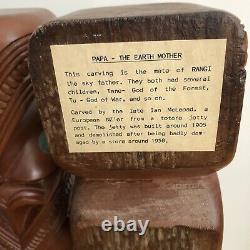 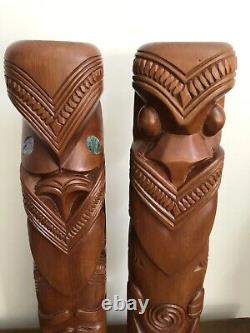 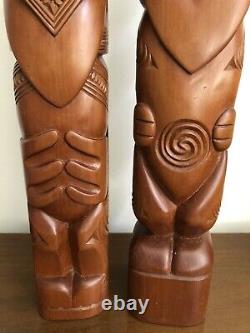 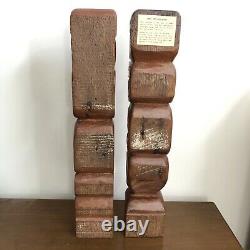 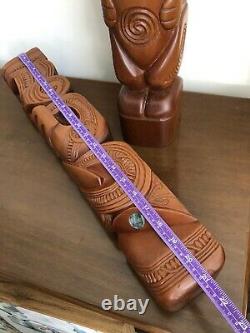 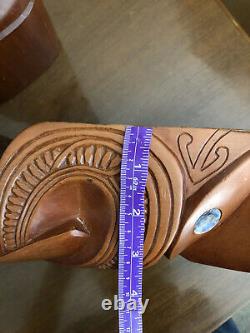 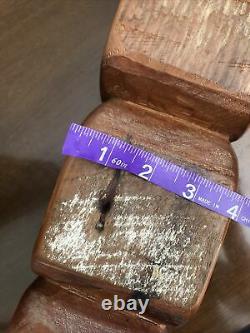 Two unique, beautiful Maori figures hand-carved from repurposed totara wood jetty posts stand just over 20 inches tall each. Excellent vintage condition with a few minor surface imperfections due to age. According to label on right figure. Papa - the earth mother. This carving is the mate of Rangi the sky father.

They both had several children, Tane- god of the forest, Tu- god of war, and so on. Carved by the late Ian McLeoad, a European NZer from a totara jetty post. The jetty was built around 1905 and demolished after being damaged by a storm around 1958.

Totara wood - repurposed from totara jetty posts. Hand carved by Ian Mcleoad in New Zealand, est. See photos for complete description and condition and notice the nails etc. On the back showing their original purpose as jetty posts. 3 5/8 to 7/8 inches deep.

The Teko Teko are human like figures often made to represent ancient tribal ancestors, and confer general protection and guardianship. As a result they are commonly depicted in a defiant stance, such as a haka or fighting stance, with a protruding tongue or holding a weapon such as a Mere or Patu. Traditionally the purpose of the Teko Teko was to overlook the forecourt in front of a carved house and challenge any visitors to the tribe. If the visitors were deemed to be friendly, Teko Teko would then offer protection; with the light reflective pua eyes used to give people the feeling they were being watched and protected as they slept. The item "2 Vtg 20 Hand Carved Maori Wood Figures Couple NZ Est 60s Teko Tiki Post Totem" is in sale since Wednesday, November 18, 2020.

This item is in the category "Collectibles\Cultures & Ethnicities\Pacific Islands". The seller is "madgie17" and is located in Matthews, North Carolina. This item can be shipped to United States.