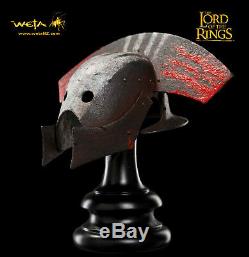 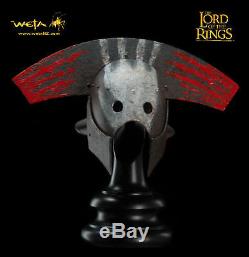 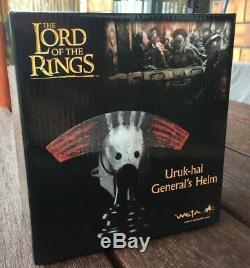 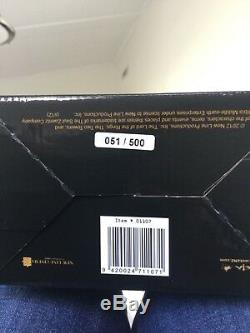 Hoping to strike his decisive blow in the War of the Ring, Saruman the White, fallen Wizard and pawn of the Dark Lord, threw his army of Uruk-hai at the people of Rohan. At the great stone fortress of Helm's Deep the newly forged and blooded forces of the Wizard fell upon the defenders of King Theoden's redoubt like waves against a shore, inexorably tearing at rock and shield alike with claws, teeth and rough hewn blades of cold iron. What Saruman's Orc-bred minions lacked in experience they made up in overwhelming numbers and irrepressible hunger for carnage and ruin. Channelling the raw energy of his soldiers, Saruman appointed officers from their ranks to direct their savagery to greatest effect, and these he crowned with skull-faced wide-crested battle helms so they might be seen and obeyed by their men amid the surging throng.

According to rank and function, each commander's crest was wrought in a distinctive shape and emblazoned in crude white and crimson heraldry of Uruk design, a fearsome visage heralding near certain doom for the keep's beleaguered defenders. This 1/4 scale helm was created by the same artists and craftspeople who worked on The Lord of the Rings.

The prop was designed by Warren Mahy and has been miniaturised by David Tremont and Jonny Brough. To ensure precise reproduction of the fine textures of the full scale prop, the helm is made from polyurethane, painted and aged by hand to match the original. It comes with the same pedestal stand as previous releases in Weta's The Lord of the Rings collection and will fit right in next to your other helms. The item "51/500 Weta Lord of the Rings Uruk Hai General's Helm Helmet NEVER OPENED" is in sale since Tuesday, March 5, 2019. This item is in the category "Collectibles\Fantasy, Mythical & Magic\Lord of the Rings\Figurines, Statues, Busts".

The seller is "gandalfnz" and is located in default. This item can be shipped worldwide.