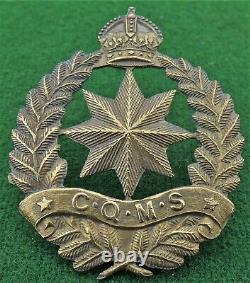 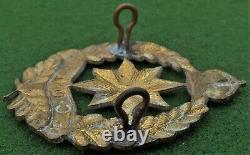 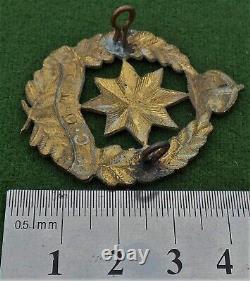 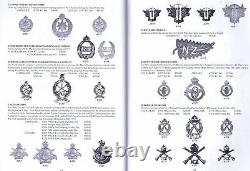 VERY SCARCE badge worn by the WW1 New Zealand ARMY SERVICE Corps in the Great War era, well prior to the NZASC becoming "Royal". Ultimately, the NZEF of World War I became known as the First New Zealand Expeditionary Force. The New Zealand Expeditionary Force (NZEF) was the title of the military forces sent from New Zealand to fight for Britain during World War I. Upon the outbreak of war, New Zealand immediately offered to provide two brigades-one of infantry and one of mounted troops-with a total of 8,500 men. As was the case with the Australian army the existing New Zealand army was a "territorial" force, designed for the defense of the home islands.

It could not be deployed overseas. Hence, it was necessary to form a volunteer "expeditionary" force.

The initial contingent of the NZEF, known as the "Main Body, " sailed on 16 October 1914 for Australia and then joined with the Australian Imperial Force (AIF) in a convoy that sailed for Egypt on 1 November. The NZEF and AIF convoy was originally bound for Britain but diverted en route to Egypt because of the state of the training camps in England. As a result, the troops were dressed in woolen uniforms for the British climate. On 2 December the convoy reached Alexandria after passing through the Suez Canal. Disembarking the troops traveled by train for Cairo, bivouacking in tent camps within sight of the Pyramids.

The NZEF was commanded throughout the war by Major General Alexander Godley, a British Army officer who in 1910, on the recommendation of Lord Kitchener, had been appointed as the commander of the New Zealand Military Forces. After Godley departed with the NZEF in October 1914, Major General Alfred William Robin commanded the New Zealand Military Forces at home throughout the war as commandant, and was pivotal in ensuring the ongoing provision of reinforcements and support to the NZEF. New Zealand, like Australia, had a pre-war policy of compulsory military training, but, like Australia, New Zealand's Territorial Army could not be deployed overseas.

Thus, the NZEF was initially composed solely of volunteers. Conscription was introduced on 1 August 1916 and by the end of the war 124,000 men-nearly half the eligible male population of 250,000-had served with the NZEF. Of these, about 100,000 had been sent overseas. General Birdwood APEX Gallipoli in WW1 5 December 1915 The NZEF was closely tied to the AIF for much of the war.

The New Zealand Expeditionary Force (later called the 1st NZEF) was finally disbanded on 31 December 1921. COLLECT the Real McCoy I have several other genuine badges and buttons listed. We will happily COMBINE these....... Any questions please message me. Add a map to your own listings. This item is in the category "Collectibles\Militaria\WW I (1914-18)\Original Period Items\Great Britain\Badges". The seller is "phillip_in_new_zealand" and is located in this country: NZ.