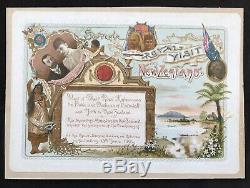 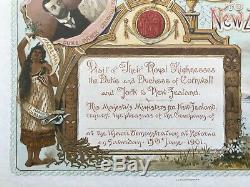 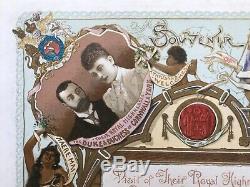 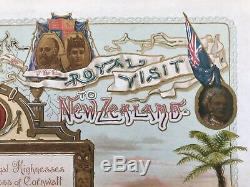 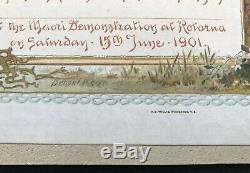 Printed on thin card and affixed to an old piece of backing card. A number of invitations to various official events were produced for their visit in June 1901, however the Maori demonstration visit is probably the scarcest. And in very good condition. Prince George and Princess Mary visited New Zealand as part of a world tour to pay tribute to the service given by the Empire nations during the Boer War.

It was originally intended to be undertaken by the Prince of Wales, however Queen Victorias death in January 1901 meant that Edward was forced to stay at home to plan the Coronation for 1902, and so his son George, Duke of Cornwall and York (later King George V) was consigned to undertake the trip. The visit to see the Hui (Grand Carnival of the Tribes) was a great success. The item "New Zealand 1901 Printed Royal Invitation to the Maori Demonstration at Rotorua" is in sale since Wednesday, November 27, 2019. This item is in the category "Collectables\Paper & Ephemera\Ephemera\1901-1950". The seller is "ephemeracity1" and is located in Dorset.