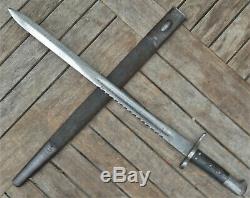 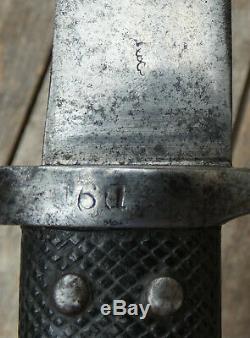 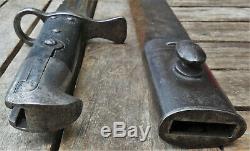 From the 17th century to World War I, it was considered the primary weapon for infantry attacks. Today, it is considered an ancillary weapon or a weapon of last resort.

New Zealand-ONLY Issued SAWBACK SWORD Bayonet Snider Carbine Very RARE 1st Type. Skennerton type = "N1" shown on page # 357. This is a very rare example of the first New Zealand contract bayonet for the short model Snider, ordered in 1873 through the (UK) War Office and filled by R. F Birmingham, via the Solingen contract maker Kirschbaum. This order had the uncommon shorter 18.1 inch (460mm) blade. This proved too short on the already diminished-size carbine so a LONGER 20.25 REPLACEMENT model was ordered, this example one of the initial order of less than 2600 that became OBSOLETE soon after inception. SELDOM encountered with their scabbards (As their leather often degrades in New Zealand's sub-tropical climate).

The scabbard of this example is NEAR FLAWLESS and irreplaceable The longer model CAN USE the Irish Constabulary scabbard as a replacement. These scabbards were NOT serial numbered unlike the bayonet they contain.

Compressed leather grips in vastly better condition than most seen (often replaced with rubber in "restoration"). The available records for the number of bayonets produced are unclear. (The NZ records being lost in the State Legislature Building fire of 1907). Ian Skennerton & Robert Richardson's AWESOME REFERENCE book "British & Commonwealth Bayonets" suggest ONLY around 2600 were made. If you do NOT posses this book? ASK ME for a scan. This particular bayonet is marked with the WD marks and Birmingham R. Overall condition is quite good for age. The sharpened blade has many scratches, light pitting, & a few rust spots the overall appearance remains good. An opportunity to secure a rare bayonet that holds considerable New Zealand historical significance. CONDITION = exactly as seen in my 12 images. We will happily COMBINE these....... That because WE MUST PAY G. An invoice (GST RECEIPT) will be issued IF REQUESTED.