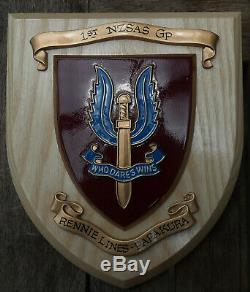 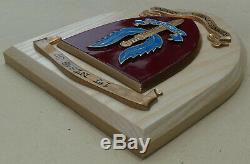 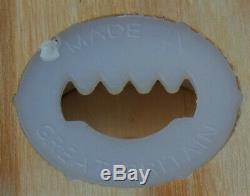 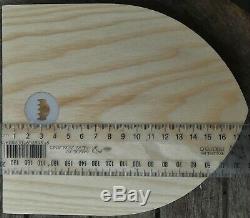 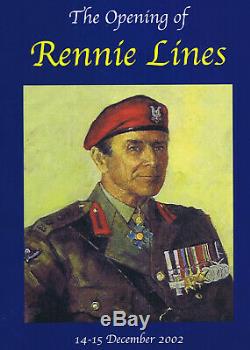 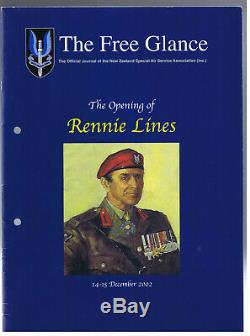 New Zealand Special Air Service GROUP personal unit member's wall plaque (ONLY, the "Free Glance" magazine is NOT included). These plaques are almost IMPOSSIBLE to obtain, unless you are a serving member of this elite unit, or a veteran. This VERY RARE "Group" plaque clearly dates BETWEEN the Opening of NZSAS's "Rennie Lines" in 2002 and their achieving REGIMENTAL Status in 2011. THIS IS THE ONLY EXAMPLE of this particular unit shield that I HAVE EVER Offered for sale and there is NOT another available. The home of the NZSAS is Rennie Lines, named after the founder Colonel Frank Rennie. Permission for the name to be used was sought from the Rennie family, and on 14 December 2002 Rennie Lines was opened by the Governor General Dame Silvia Cartwright PCNZM, DBE, QSO. Members of the NZSAS have conducted operations in a diverse range of places, including Malaya, Borneo, Thailand, Vietnam, Bougainville, Kuwait, East Timor, the Solomon Islands and Afghanistan. D Squadron (Commando) was raised on 5 December 2005D Squadron (Commando) was raised on 5 December 2005 under the name Counter Terrorist Tactical Assault Group (CTTAG).

They were selected and trained by the Operational Support Squadron1 and B Squadron NZSAS. By 2009, the CTTAG had matured to the point that it had grown its own Officer Commanding and NCOs. In recognition of this, on 5 December 2009, the CTTAG was renamed Commandos and became D Squadron (Commando), a separate sub-unit on the 1 NZSAS Regt Order of Battle. E Squadron (Explosive Ordnance Disposal) was raised as an independent force troops squadron on 15 August 2005 by Cabinet, with the original name 1st New Zealand Explosive Ordnance Disposal Squadron.

It was given responsibility for rendering safe all explosive ordnance found in New Zealand above the waterline. On 15 July 2009, the Squadron was placed within 1 NZSAS Regt as a special operations capability and is now known as E Squadron (EOD). E Sqn reached full operational capability on 1 July 2010. Any questions please message me.

New Zealand residents SORRY but you pay G. Invoice will be included with your parcel on request.

BECAUSE we must pay G. The item "NEW ZEALAND Special Air Service 1st NZSAS GROUP RENNIE LINES SAS Wall Plaque" is in sale since Friday, January 17, 2020. This item is in the category "Collectables\Militaria\Other Militaria\SAS". The seller is "phillip_in_new_zealand" and is located in Auckland. This item can be shipped to North, South, or Latin America, all countries in Europe, all countries in continental Asia, Australia.