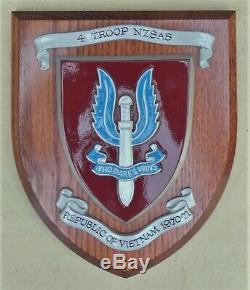 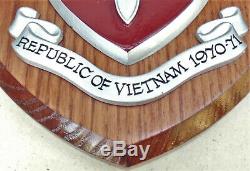 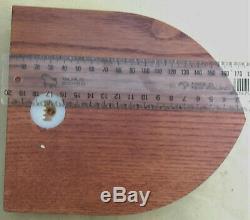 New Zealand Special Air Service Vietnam era 4 Troop personal unit member's wall plaque. These plaques are almost IMPOSSIBLE to obtain, unless you are a serving member of this elite unit, or a veteran. THIS IS THE ONLY EXAMPLE of this particular unit shield that I HAVE EVER Offered for sale and there is NOT another available. Vietnam 1968 - 1971 On 16 November 1968, a Troop from 1 Ranger Squadron, NZSAS known as 4 Troop, New Zealand Special Air Service, was deployed to the Republic of South Vietnam.

The Troop consisting of one officer and 25 other ranks was based in Nui Dat, South Vietnam and served in the 1st Australian Task Force, attached to the Australian Special Air Service Regiment (SASR). The troopers were primarily employed on Long-Range Reconnaissance Patrols (LRRP) to collect information for 1ATF and were sometimes additionally tasked to conduct ambushes of communist forces.

After a build-up period, the first New Zealand commanded patrol commenced on 7 January 1969. Each tour of duty in South Vietnam was for 12 months.

At the end of each year, the Troop was replaced by another Troop from 1 Ranger Squadron, NZSAS. The first Troop was commanded by Captain Terry Culley; this Troop was replaced in full in late 1969 by a Troop commanded by Captain Graye Shattky. Members of this first replacement Troop took part in an operational Squadron parachute insertion on 1516 December 1969. The final rotation occurred in late 1970, when the Troop was again replaced by a new body of men commanded by Second Lieutenant Jack Hayes. 4 Troop was withdrawn from South Vietnam on 20 February 1971, as a part of the New Zealand Government's withdrawal policy.

On 14 January 1970 Sergeant G. Campbell was killed in action, being the first and only fatal NZSAS casualty during the unit's time in Vietnam with otherwise four wounded.

The NZSAS did a total of 155 patrols in their 26 months of service in Vietnam and it was a NZ patrol that made the last contact with enemy forces before Australian and New Zealand SAS operations ceased, killing two Viet Cong soldiers north-west of Thua Tich on 4 February 1971. The New Zealand Special Air Service, abbreviated as 1 NZSAS Regt, was formed on 7 July 1955 and is the special forces unit of the New Zealand Army, closely modelled on the British Special Air Service (SAS). It traces its origins to the Second World War and the famous Long Range Desert Group that New Zealanders served with.

The New Zealand Government states that NZSAS is the "premier combat unit of the New Zealand Defence Force" and it has been operationally deployed to locations including the Pacific region, Afghanistan and the jungles of South-East Asia. Individual members of the NZSAS have received honours and awards, most notably the Victoria Cross for New Zealand awarded to Corporal Willie Apiata. In 2004, the unit was awarded the United States Presidential Unit Citation for its contribution in Afghanistan. The NZSAS was accorded regimental status in 2013. It has the responsibility of conducting counter-terrorism and overseas special operations, and performing the disposal of chemical, biological, radiological, nuclear and explosive hazards for military and civilian authorities. Any questions please message me. New Zealand residents SORRY but you pay G. Invoice will be included with your parcel on request. BECAUSE we must pay G. The item "NEW ZEALAND Special Air Service 4 Troop VIETNAM WAR 1970-1971 Unit Member PLAQUE" is in sale since Wednesday, February 12, 2020. This item is in the category "Collectables\Militaria\Other Militaria\SAS". The seller is "phillip_in_new_zealand" and is located in Auckland. This item can be shipped to North, South, or Latin America, all countries in Europe, all countries in continental Asia, Australia.