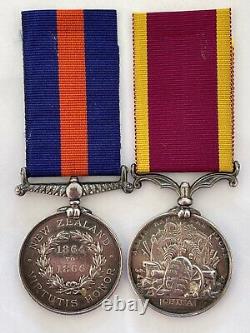 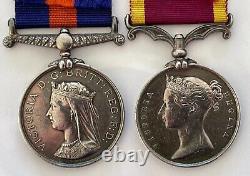 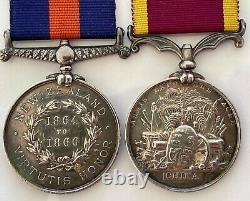 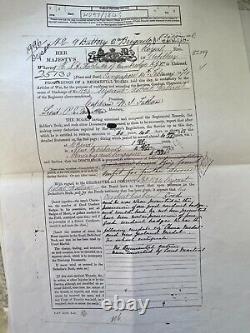 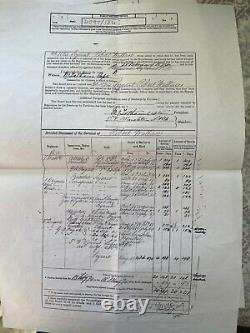 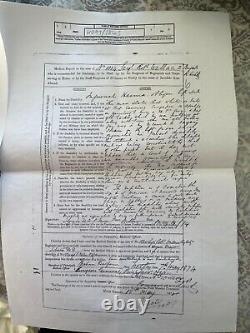 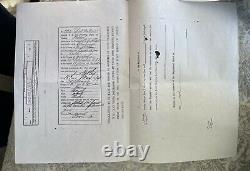 Both medals correct officially impressed naming. Robert Wallace was born in St Cuthberts, Edinburgh, Scotland in 1835 a Butcher, he attested for the Royal Artillery at Leith 20th September 1853 aged 18 years 4 months and joined 7th Battalion Royal Artillery to be trained as a Gunner and Driver.

Transferred 2nd Brigade RA 1st August 1867, he reverted to Sergeant 29th February 1868. Wallace served in China 1 year 198 days, New Zealand 2 years 357 days including the action of Gate Pa 29th April 1864 when the British forces suffered a humiliating defeat with 31 killed and 80 wounded , he also served at Penang and Singapore for 6 years 173 days. Discharged unfit for Military service 18th May 1874 having completed 21 years 241 days service, the result of an injury suffered when moving a 32 pounder gun in a fort in Singapore and the occasional fit. Intended place of residence recorded as Woolwich. On discharge his Commanding Officer wrote. His Conduct has been Good and he was when promoted on the possession of one Good Conduct Badge and would, had he not been promoted have been now in possession of four Good Conduct Badges. He has the following Medals viz China Medal and New Zealand Medal, no school certificate, no Regimental (defaulters book) entries and never convicted by Court Martial. Not awarded a Long Service and Good Conduct Medal, the reason for this not documented in his service record. The item "ORIGINAL New Zealand Maori War Medal 1864 1866'Gate Pa' & China Medal Pair" is in sale since Monday, December 20, 2021.

This item is in the category "Collectables\Militaria\Other Eras, Wars". The seller is "hamptonside" and is located in Melbourne. This item can be shipped worldwide.