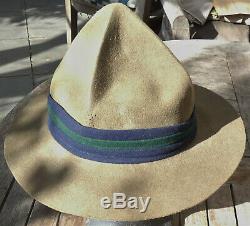 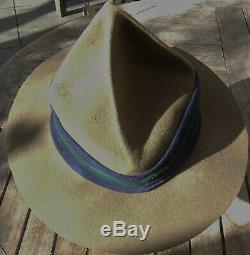 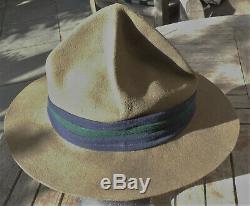 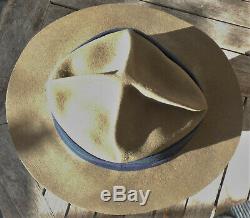 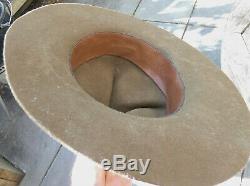 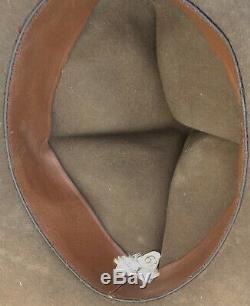 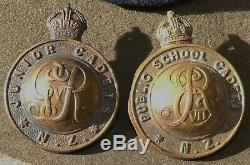 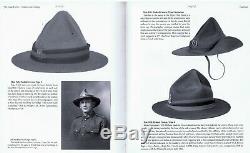 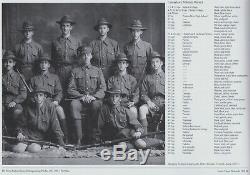 This WW2 era New Zealand Army Cadets "LEMON SQUEEZER" (Known as a Lemon "Reamer" in USA) hat is circa early 1940's. CONDITION = Much BETTER than most seen of this AGE, They are usually chewed-to-bits by NZ's VORACIOUS Sub-Tropical MOTHS who adore Wool-Felt materials. SHOWS very little service-wear, despite being at least 75 years OLD. The original leather sweatband retains all original stitching. The "PUGGAREE" is the coloured hat band around the base of the hat. The colours DARK BLUE-EMERALD GREEN-DARK BLUE. Indicate this to be a Quite RARE New Zealand Army 10th Company Hibernian IRISH Cadets unit Lemon Squeezer. Hibernia is the Classical Latin name for the island of Ireland. The name Hibernia was taken from Greek geographical accounts. During his exploration of northwest Europe, Pytheas of Massilia called the island Iérn. The original meaning of the name is thought to be "abundant land". SIZE = SMALL UK size 6 7/8ths = USA size 7 or Metric size 56. This is the ONLY EXAMPLE of a 10th Coy. Hibernian Cadets lemon Squeezer that I have EVER SEEN , owned, or offered for sale = Quite a RARE find.

Intended for insulation, the puggaree was a traditional Indian head-wrap, adapted by the British for headdress worn in hot, sunny regions. During World War One a plain khaki cloth band was worn and this practice continued until compulsory training was suspended in 1929. The New Zealand Army "Lemon Squeezer" Hat type's HISTORY...... The New Zealand Army, whose uniforms have historically followed the British pattern, retain the felt campaign hat as their most visible national distinction.

This headdress is distinguished by a high crown and deep indentations on all four sides. It was adopted by the Wellington Regiment about 1912 (as proposed by William Malone) and became general issue for all New Zealand units during the latter stages of World War I.

In addition to badge insignia, the different branches of service were differentiated by coloured puggarees or wide bands around the base of the crown blue and red for artillery, khaki and green for mounted rifles, khaki and red for infantry, blue for engineers, yellow for Pay Corps, khaki and white for Army Service Corps, cherry-red for the Medical Corps and maroon for the Veterinary Corps. The hat was worn to a certain extent during World War II, although often replaced by more convenient forage caps or berets.

After being in abeyance since 1960, the hat was reintroduced in 1977 for ceremonial dress, where it was usually worn with a version of the khaki "no 2" service dress of the British Army. Officer cadets and the New Zealand Army Band wear this headdress with a scarlet and blue full dress uniform. In 2012 it was announced that this form of campaign hat was to be replaced for general wear by the "Mounted Rifles Hat"; a headdress resembling that of the Australian Army but without the turned-up side rim. The historic "Lemon Squeezer" has however been retained for use by honour guards and other limited categories on special formal occasions. We will happily COMBINE these....... Any questions please message me. Add a map to your own listings. NEW ZEALAND IRISH 10th Coy. HIBERNIAN Cadets CAMPAIGN HAT Lemon Squeezer" is in sale since Tuesday, December 31, 2019. This item is in the category "Collectibles\Militaria\WW II (1939-45)\Original Period Items\Great Britain\Hats & Helmets". The seller is "phillip_in_new_zealand" and is located in Auckland (aprox. 12,000 "clicks" from USA).