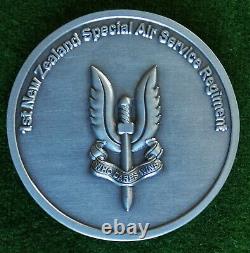 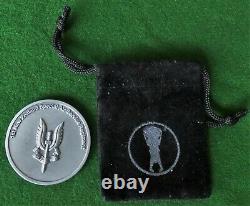 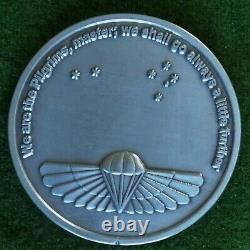 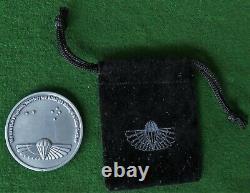 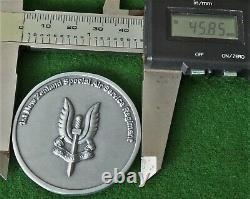 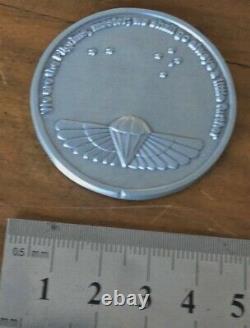 Recipient NAMED New Zealand Special Air Service REGIMENT Unit CHALLENGE COIN. An EXTREMELY RARE and entirely genuine N. ONLY issued (PRESENTED) to serving NZSAS members ON QUALIFICATION ("BADGING") into New Zealand's elite Special Forces Regiment. Presented after passing their rigorous SELECTION COURSE that 95% of those that attempt do not make the grade. To join the NZSAS Regiment, New Zealand Army, Navy, or Air Force personnel must pass a selection course, with the course varying depending on the role they seek within the Regiment.

In 2011 the selection course was also opened to civilians; they spend two days preparing for the selection course learning military skills considered necessary to compete safely against military applicants. In 2007, a four part documentary NZSAS: First Among Equals was produced on the selection course and training. I do have an original "play any-zone" DVD Disc copy available if of interest? This Trooper-ISSUED and OFFICIALLY IMPRESSED named, DATED, & service numbered example was awarded to a NZSAS trooper in 2014.

Manufactured in Australia by Platatac Who officially contract-manufacture many of both the NZSAS and the Australian Special Air Service. Regimental challenge coins and insignia. The Platatac logo (A Platypus SKULL) appears in white, on THE EDGE of the coin and on the "Bag of Issue". The "NOTCH" seen dead-center at base is NOT "DAMAGE ".

It is an aid to positively locate the coin when it was PERSONALLY NAMED with rank (Trooper) date of issue, and RECIPIENT's SERVICE NUMBER. This is done so that were one of these challenge coins to come on the market? They SELDOM, if EVER, do!! This current-issue GENUINE NZSAS Regiment Alloy challenge coin celebrates the NZSAS becoming "Regimental" in 2013. (Previously they were, variously, a "Squadron", and a "Group").

Just like all items that I sell :. The New Zealand Special Air Service, abbreviated as 1 NZSAS Regt, was formed on 7 July 1955 and is the special forces unit of the New Zealand Army, closely modelled on the British Special Air Service (SAS). It traces its origins to the Second World War and the famous Long Range Desert Group that New Zealanders served with. The New Zealand Government states that NZSAS is the "premier combat unit of the New Zealand Defence Force" and it has been operationally deployed to locations including the Pacific region, Afghanistan, and the jungles of South-East Asia. Individual members of the NZSAS have received honours and awards, most notably the Victoria Cross for New Zealand awarded to Corporal Willie Apiata.

In 2004, the unit was awarded the United States Presidential Unit Citation for its contribution in Afghanistan. The NZSAS was accorded regimental status in 2013. It has the responsibility of conducting counter-terrorism and overseas special operations and performing the disposal of chemical, biological, radiological, nuclear, and explosive hazards for military and civilian authorities. Any questions please MESSAGE ME. BECAUSE we must PAY GST on all locally-delivered sales :.

A GST receipt or Invoice will be supplied on request. This item is in the category "Collectables\Militaria\Other Militaria\SAS". The seller is "phillip_in_new_zealand" and is located in this country: NZ. This item can be shipped worldwide.