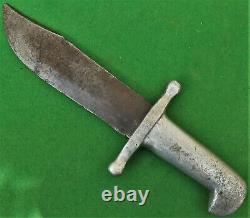 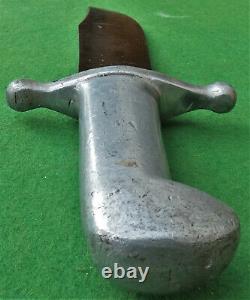 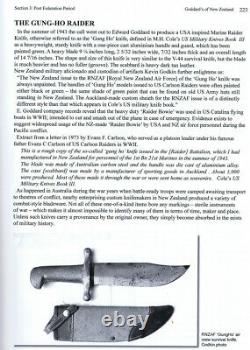 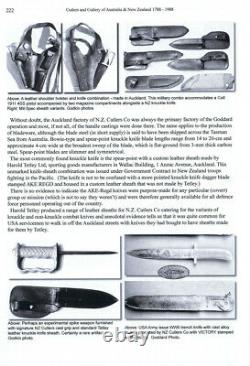 Many credit Carlson with developing the tactics and attitude that would later come to define America's special operations forces. He is renowned for the "Makin Island raid" in 1942, and his raiders' "Long Patrol" (aka Carlson's patrol) behind Japanese lines on Guadalcanal, in which 488 Japanese were killed. Carlson popularised the phrase " gung-ho ".

Approx 200 were made as survival knives for our tiny Royal New Zealand Air Force. The RNZAF had about 200 aircraft during WW2. By June 1942, the RNZAF had only eight operational squadrons six in New Zealand and two in Fiji. The only way to tell whether one of these MASSIVE Bowie Knives was made for either The Marine Raiders or the RNZAF , without their scabbard, is by their blade-length. This RNZAF example would be mush rarer than the Carlson's Raiders knives which would outnumber the RNZAF issue knives on a ratio of approx 3:1. Carlson Raider knives have been found with hilts painted either black, green, or in plain Alloy (Which oxidizes and SHEDS paint easily). The likely SOURCE of the Alloy used in the massive Aluminium (Spelled & PRONOUNCED differently, here, than in USA) was damaged military aircraft (IE Duralium) as New Zealand had NO WAY to MAKE Aluminium before. The Tiwai Point Aluminium Smelter. Any questions please MESSAGE ME. New Zealand customers NZPO Courier FREE........ Receipt will be issued on request. The item "RNZAF 1943 GUNG HO Bowie Knife as used by USMC CARLSONS RAIDERS New Zealand-Made" is in sale since Tuesday, February 2, 2021. This item is in the category "Collectibles\Knives, Swords & Blades\Daggers". The seller is "phillip_in_new_zealand" and is located in Auckland (aprox. 12,000 "clicks" from USA). This item can be shipped worldwide.