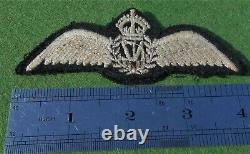 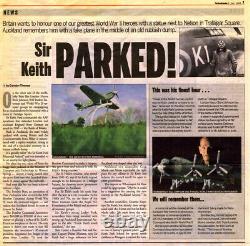 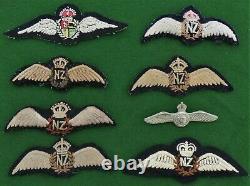 Genuine Royal NEW ZEALAND Air Force Pilot's flight qualification BREVET or "Pilot's Wings" executed nicely in "flat" unpadded Cotton. Pilot's battle dress or service dress tunic & likely worn WW2. These Pilot's Wings OFTEN would-have a sewing pin or "Safety Pin" stitched onto the rear that would have allowed for easy removal for cleaning. Owning ONE wing was typical of the New Zealand Pilots, who were mostly NOT from the wealthy elite of society, but still had to furnish their own kit once commissioned. These "flat" type RNZAF brevet are most-often seen on Sergeant Pilot's uniforms.

ONE (1) wing ONLY is offered in this listing. NO LESS than 10% of ALL AIRCREW that flew in the epic Battle of Britain were Kiwis (New Zealanders). That is despite New Zealand having the SMALLEST Air Force in the entire British Commonwealth. Even the COMMANDER who most will credit with the ultimate RAF Victory was a NEW ZEALADER = "Kiwi Keith". Air Chief Marshal Sir Keith Rodney Park, GCB, KBE, MC & Bar, DFC (15 June 1892 - 6 February 1975) was a New Zealand soldier, First World War flying ace and Second World War Royal Air Force commander.

He was in operational command during two of the most significant air battles in the European theatre in the Second World War, helping to win the Battle of Britain and the Battle of Malta. In Germany, he was supposedly known as "the Defender of London". GUARANTEED 100% GENUINE "For Life" (like all items that I sell).

Especially with the (Recently-adopted by NZPO) PURE EVIL of "Volumetric" pricing. We will happily COMBINE these....... That because WE MUST PAY G.

An invoice (GST RECEIPT) will be issued IF REQUESTED? This item is in the category "Collectibles\Militaria\WW II (1939-45)\Original Period Items\Great Britain\Medals, Pins & Ribbons". The seller is "phillip_in_new_zealand" and is located in this country: NZ. This item can be shipped worldwide.