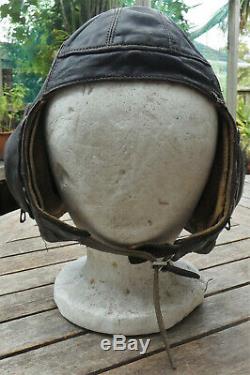 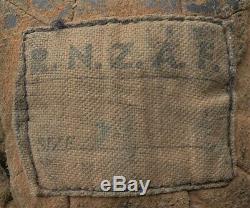 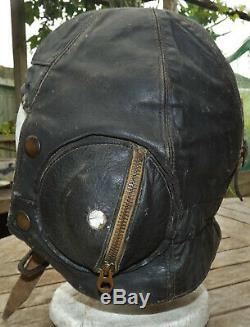 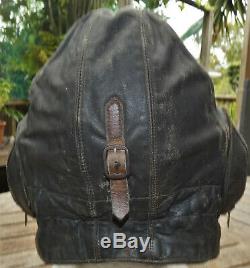 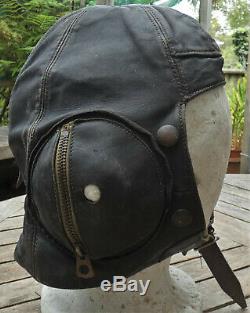 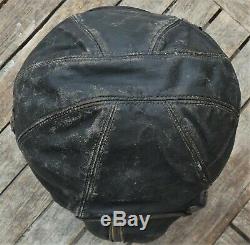 This listing is for a GUARANTEED genuine Royal NEW ZEALAND Air Force R. WW2 era RNZAF marked Flying Helmets become HARDER TO FIND here in New Zealand every year. The Type B Flying helmet is the type WORN DURING THE BATTLE OF BRITAIN. Fully 10% of ALL AIRCREW entitled to WEAR The hallowed "BATTLE OF BRITAIN" BAR to their 39-45 Star were KIWIS New Zealand Aircrew from THE SMALLEST AIR FORCE in the entire British Commonwealth. CONDITION = Heavy use wear indicating MUCH SERVICE LIFE sadly no provenance like most genuine items found. During the first years of aviation pilots started wearing leather flying helmets as a form of protection from the cold and the noise of aircraft engines. Leather was becoming a popular choice for protective gear with the rise of motor sport and aviation at the start of the 1900s.

It has many advantages that made it the ideal material for flying helmets. It is warm, durable, impermeable to liquids therefore waterproof, flexible and can be cut to curve around the head. It is wind-proof and has the great advantage of not accumulating dust. It was also found that leather helmets offered a level of protection against fire. Perhaps the most iconic design of early leather flying helmet was known as the Type B helmet.

This was designed to accommodate earphones in pockets in the ear-flaps and was easy to wear with oxygen masks and goggles. A detailed description of a typical Type B helmet can be found on the website of The Imperial War Museum (London, England). It is made from six vertical panels which meet at a central ridge panel running from front to back. There is a rectangular horizontal panel which goes across the forehead and it includes padded leather oval housings at the ears.

The chinstrap, also made of leather, is stitched to the right side and buckled to a small strap on the left. The brown leather of the helmet is lined with buff-coloured chamois and has a rectangular length of brown-coloured material sewn to the inside of the forehead. A particularly fine example of a Type B flying helmet can be found in the Thinktank, The Science museum for Birmingham, England. The Type B flying helmet was designed to accommodate the addition of earphones for radio communication, but unlike later models did not include integrated wiring.

Similarly, the helmet was styled to be comfortably worn with an oxygen mask and separate goggles to protect the eyes. Protection from head injuries was not considered, the leather is soft and flexible not hard to withstand blows. There were many female pilots in the early part of the 1900s who wore the same design of protective clothing, including helmets, as their male counterparts. The leather helmets and jackets, the goggles and boots allowed the women to function as pilots in the same terms as men. Manufactures of early flying helmets were Alfred Dunhill Ltd. Of England, Roold in Paris and Gammages of Holborn. The Royal New Zealand Air Force (RNZAF) is the air force component of the New Zealand Defence Force. It was formed from New Zealand elements of the British Royal Air Force, becoming an independent force in 1923, although many RNZAF aircrew continued to serve in the Royal Air Force until the end of the 1940s. The RNZAF fought in World War II, Malaya, Korean War, Vietnam and the Gulf War plus various United Nations peacekeeping missions. The RNZAF's air combat capability ended in 2001 with the disbanding of the A-4 Skyhawk squadrons.

The Air Force is led by an air vice-marshal who holds the appointment of Chief of Air Force. The RNZAF motto is the same as that of the Royal Air Force, Per ardua ad astra, meaning "Through adversity to the stars". Any questions please MESSAGE ME. Receipt will be issued on request. The item "RNZAF Royal NEW ZEALAND Air Force BATTLE OF BRITAIN Era B Type Flying HELMET" is in sale since Wednesday, March 4, 2020.