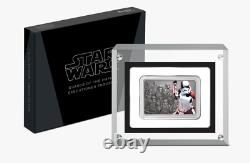 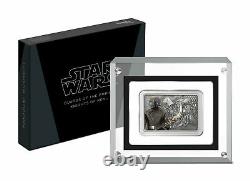 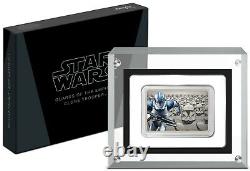 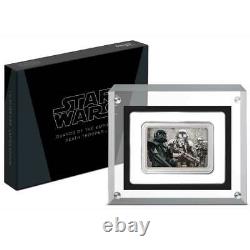 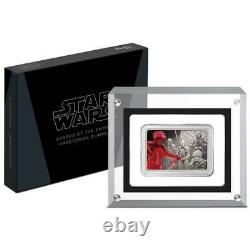 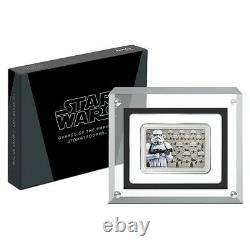 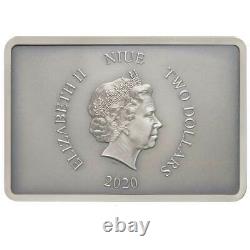 This is a complete edition of all current 6 coins that have been minted to date. Branded box, the coin is placed inside an acrylic holder which is ideal for displaying this precious limited-edition treasure.

A Certificate of Authenticity is also included inside the box to confirm the metal purity of the coin and its unique number in the 2,000-coin mintage. A truly stunning collectible for any. 2021 Coin #6 - The Executioner Trooper.

The coin shows one Knight, Vicrul, in full colour holding his vicious ultrasonic scythe. The detailed, engraved background shows the rest of the masked Knights along with their leader Kylo Ren. This rectangular, 1oz pure silver legal tender coin incorporates the Ian Rank Broadley effigy of Her Majesty Queen Elizabeth II and an antique finish to add to the menacing feel. 2020 Coin #4 - Clone Trooper. This latest coin in the officially licensed Guards of the Empire Silver Coin Collection features the original backbone of the Republics new military, the Clone Trooper.

This 1oz fine silver coin has been coloured and engraved for maximum impact. It shows a Clone Trooper running at speed with his blaster rifle in front of a squad of Clone Troopers. 2020 Coin #3 - Death Trooper. Naturally the elite Stormtrooper in the Galactic Empires military, the Death Trooper, feature in our officially licensed Guards of the Empire Silver Coin Collection. This rectangular 1oz pure silver coin has an antique finish which adds to the menacing feel. It shows a coloured Death Trooper in his specialized armor with a dark, ominous gleam.

The personal sentinels of Supreme Leader Snoke, the Praetorian Guard, feature in our officially licensed Guards of the Empire Silver Coin Collection. The coin shows four Guards, one from each pair. At the forefront, one Guard is shown in full colour with his striking crimson red armour. The engraved background shows three more warriors protecting Supreme Leader Snoke. This rectangular, 1oz pure silver coin incorporates the Ian Rank Broadley effigy of Her Majesty Queen Elizabeth II and an antique finish to add to the menacing feel. 2020 Coin #1 - Stormtrooper. The Empires elite shock troops, the. Are naturally the first to feature in the officially licensed Guards of the Empire Silver Coin Collection. Stormtrooper ranks were filled by recruits trained for blind obedience and fanatical loyalty.

On planets such as Lothal. Stormtroopers became the face of the Empire, opposed by a brave few who dreamed of restoring freedom to the galaxy.

This coloured and engraved coin features a Stormtrooper with his blaster rifle in front of a horde of the infamous bucketheads. The design is completed with an antique finish. The item "Star Wars Guards of the Empire 1oz Silver Coin Complete Collection" is in sale since Wednesday, April 7, 2021. This item is in the category "Coins & Paper Money\Coins\ World\Australia & Oceania\New Zealand".