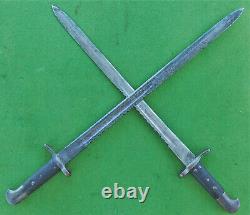 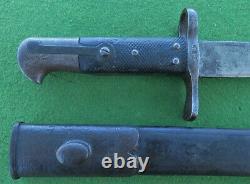 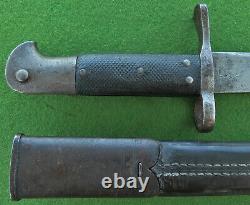 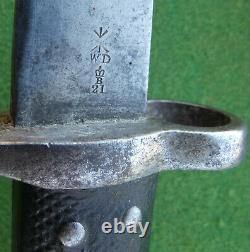 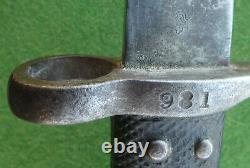 Bayonet Bayonette bayonet baïonnette bayonet baionette BAYONET baionette Bayonette bayonet baïonnette. A bayonet (from French baïonnette) is a knife, sword, or spike-shaped weapon designed to fit on the end of the muzzle of a rifle, musket or similar firearm, allowing it to be used as a spear. From the 17th century to World War I, it was considered the primary weapon for infantry attacks. Today, it is considered an ancillary weapon or a weapon of last resort. New Zealand-ONLY Issued SAWBACK SWORD Bayonet Snider Carbine Very RARE 1st Type.

Skennerton type = "N1" shown on page # 357. This is a very rare example of the first New Zealand contract bayonet for the short model Snider, ordered in 1873 through the (UK) War Office and filled by R. F Birmingham, via the Solingen contract maker Kirschbaum. This order had the uncommon shorter 18.1 inch (460mm) blade. This proved too short on the already diminished-size carbine so a LONGER 20.25 REPLACEMENT model was ordered, this example one of the initial order of less than 2100 that became OBSOLETE soon after inception. SELDOM encountered with their scabbard complete (As their leather often degrades here in New Zealand's sub-tropical climate). Compressed leather grips in vastly better condition than most seen (often replaced with rubber in "restoration"). The available records for the number of bayonets produced are unclear. (The NZ records being lost in the State Legislature Building fire of 1907).

Ian Skennerton & Robert Richardson's AWESOME REFERENCE book "British & Commonwealth Bayonets" suggest LESS THAN 2100 were made. (As no example with a rack # HIGHER than 2100 has ever come-to-light).

This particular bayonet is marked with the W. ("WAR DEPARTMENT") marks and Birmingham R. Overall condition of handle and blade is good for age, the scabbard chape ("drag") lower Steel scabbard furniture is MISSING and has been cleverly replaced with a leather "filler". The scabbard leather MAY BE original and if-so has been restitched.

The sharpened blade has many scratches, light pitting, & a few rust spots the overall appearance remains good. An opportunity to secure a rare bayonet that holds considerable New Zealand historical significance. CONDITION = exactly as seen in my 12 images. We will happily COMBINE these....... The advent of the Snyder into the British service saw it's use in New Zealand, by the Imperial troops and Volunteers, and the Snyders were beginning to arrive in New Zealand by the end of the second Maori War. You WILL FIND IT listed in "British & Commonwealth Bayonets" by Ian Skennerton & Robert Richardsen. (ALL THREE versions of this ULTRA RARE bayonet are covered Pages # 356 - 361).

The 1st type had the 18.25 blade that proved to be too short. The 3rd type (N3) was the Snyder sawback bayonet BAR ON BAND type with an 18 blade.

New Zealand's first sizeable orders for rifles, carbines and bayonets commenced in the mid 1870's and the most popular was the Snyders. Even in the 1890's there was no regular issue of the Martini Henry and the first Martini rifles or carbines to see general use were the. 303 Martini Enfields at the turn of the 20th Century. SOME of the New Zealand Snyders were ordered with a special bayonet, the sawback sword type.

The 18 blade sawback bayonet was introduced into service in Britain with the Irish Constabulary model in 1868 and then this pattern was used with the trials Martini Henry long-chamber rifles in 1869. When a pattern was approved for the Martini Henry rifle in 1875, the 18" blade model was manufactured at first, but the WRONG blade length had been sealed, as it had been INTENDED to seal the model with a 20" blade.

The longer blade was then manufactured as the correct pattern, although the sawback bayonet was not widely issued with the Martini rifles. Following this trend, New Zealand ordered sawback bayonets with its short Snyder rifles, but this bayonet was not in production in England at the time of the order (1873) and the only models on issue were to the Irish Constabulary. So, the bayonets were ordered from the German trade, who supplied many British sword bayonets and the contract was filled by Kirschbaum in Solingen. The New Zealand contract SNIDER SAWBACK BAYONET is classified as the FIRST TYPE and shown as "N1". A distinction has been made between two types as there were two different contracts, and for different Snyders.

The stand numbers, which are matched to the acompanying rifle, are marked on the crosspiece, and the specimens examined have been recorded with numbers between the high 700's and 2091. Exact quantities and dates of the contracts for these sawback bayonets are not easy to ascertain; most of the documentation in New Zealand which relates to this period was destroyed in Wellington when State Legislature Buildings were burned down in 1907. BSA records indicate an order for 2000 Snyder short rifles and sawback bayonets and scabbards being passed on from the War Office, and this is reported to have been for New Zealand. The last contract (April 1860) was lost to C. Bonehill of Birmingham, who tendered a lower price, and the reason for the requirement "without bayonets" was because these were being supplied from War Department stores. It is obvious that not all the rifles and artillery carbines were supplied with bayonets, and probable that not all the sword bayonets sipplied were the sawback types, but the more usual British Yataghan models. The sawback bayonets were ordered through the War Office and so they were inspected at R. Birmingham and marked with the Birmingham view mark. Contract bayonets have the 18" blade, as the 20" version was not introduced into British service until 1875. While the available records do not agree when it comes to the quantities and bayonets are not adequately described, it is concluded that the 1874 batch of 2,000 rifles from B. Were those supplied with the sawback bayonets, and these may well have been ordered from the War Office as early as 1871. A further 600 short rifles with sawback bayonets appear to have been bought in 1875, while the 1878 and 1879 orders for 1,000 and 2,000 short rifles respectively, were more likely to have been issued with the yataghan bayonet.

The British sawback bayonets for the Irish Constabulary carbine, trials Martini-Henry and the Martini-Henry in 1875 ARE ALL Bar on Band models. Any questions please message me. Add a map to your own listings.

The item "Ultra RARE New Zealand Pattern N1 SNIDER SAWBACK Rifle BAYONET & Scabbard" is in sale since Sunday, February 28, 2021. This item is in the category "Collectibles\Militaria\WW I (1914-18)\Original Period Items\Great Britain\Edged Weapons". The seller is "phillip_in_new_zealand" and is located in Auckland (aprox.