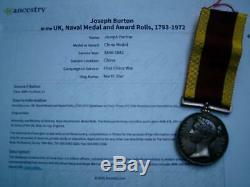 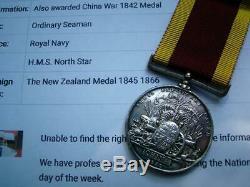 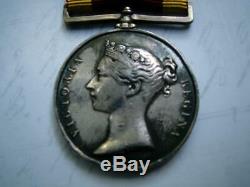 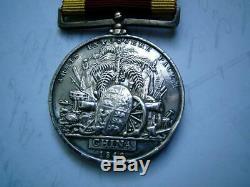 Comes with medal roll extracts, confirmed entitled to both 1842 China Campaign medal and New Zealand campaign medal 1845-66 while serving aboard HMS North Star (was possibly a member of the Naval Brigade that landed in support of the British Army). May also have been entitled to Arctic medal when North Star sent to find ill fated ships of the Franklin expedition, for further research.

She was launched in 1824. In September 1841 Captain Sir J. Home was appointed to North Star. During the period 1841-42 she served with Sir William Parker's ships in the First Anglo-Chinese War (183942), known popularly as the First Opium War The First Opium War, also known as the Anglo-Chinese War, was a series of military engagements fought between the United Kingdom and the Qing Dynasty of China over their conflicting viewpoints on diplomatic relations, trade, and the administration of justice in China.

The China War Medal was originally intended by the Governor-General of India, in October 1842, to be awarded exclusively to all ranks of the Homourable East India Company's Forces. Instead, in 1843, under the direction of Queen Victoria, the British Government authorised its award to all members of the British Army, Royal Navy and the Indian Army and Navy, who had belonged to units that had "served with distinction" in China between 5 July 1840 and 29 August 1842. The award covered the following actions: Canton River operations of 1841 (First & second battle of Canton).

First & second capture of Chusan, in 1840 and 1841. Battles of Amoy, Ningpo, Chinhai, Tzeki, Chapu, Woosung, in the Yangtze River, and the assault of Chinkiang This campaign became known as the First Opium War, ending in the seizure of Nanking.

On 28 March 1845 cannon fire from North Star was directed at the p of Pmare II on the coast in the Bay of Islands. A p is a fortified village. Because of the almost constant intertribal warfare, the art of defensive fortifications had reached a very high level among the Mori. The colonial forces were able to occupy Pmare's p without a fight, although up until that time Pmare had been considered neutral and was not a supporter of the rebellion led by Hone Heke. On 3 May 1845 a small naval brigade from both North Star and HMS Hazard supported the 58th Regt.

From 27 December 1845 to 11 January 1846 officers, seamen and Royal Marines from North Star assisted the army at the siege of Ruapekapeka P. Officers present at the battle were Commander Hay and Lieutenant Egerton. Murray, a midshipman, was killed during the battle. On 19 December 1846 she arrived in Portsmouth sailing via the Cape of Good Hope. Under Commander James Saunders North Star sailed to the Arctic in 1849 in the spring on a venture to search for and resupply Captain Sir James Clark Ross' expedition, who in turn had sailed in 1848 trying to locate the whereabouts of Sir John Franklin's expedition.

Failing to find Franklin or Ross, Saunders's mission aboard North Star consisted in depositing stores along several named areas of the Canadian Arctic coast and returning to England before the onset of winter. North Star Bay in Greenland is named in honour of HMS North Star.

While wintering in the frozen bay in 184950 Saunders named numerous landmarks in that area. In August 1850 North Star broke free of the ice and crossed the Baffin Bay to Possession Bay, entering Lancaster Sound and reaching Whaler Point.

After leaving the remaining stores at Navy Board Inlet, North Star sailed back to England. In 1860 she was broken up at the Chatham Dockyard.

The item "Victorian China Opium War 1842 medal J Burton Ord HMS North Star ent New Zealand" is in sale since Sunday, June 14, 2020. This item is in the category "Collectables\Militaria\19th Century (1800-1899)\Medals/ Ribbons". The seller is "theonlineauctionsale" and is located in England.